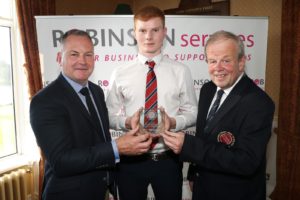 Congratulations to Owen Dick, who was presented with an award by David Robinson, Managing Director of Robinson Services and Richard Johnson, President of the NCU in recognition of his 6-33 bowling performance against Donacloney Mill on 11th May.

Progress in Irish National Cup for 1st XI
Another really good day for the club, with the firsts winning their National Cup tie by 35 runs and the seconds beating Bangor 2nds in the Intermediate Cup by 8 wickets.
Michael Glass was the standout performer, with his quickfire 29 easing the home side to a competitive total followed by taking 6 wickets for 25 runs to leave the visitors struggling at 66-8. Although the Bond’s Glen rearguard fought back in style, the total always looked out of reach and so it proved with Alphie taking the final wicket with the visitors still 35 runs short, 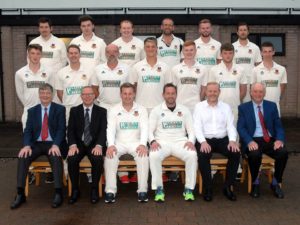 In a dramatic turn of events, the 1st XI climbed to second spot in the league and in so doing win promotion back to Section 1 of the NCU Senior League!
Going in to the final weekend, Ballymena were in third place in the league needing a convincing win over Belfast Superkings and relying on BISC overcoming Cliftonville Academy, whose only defeat all season had come against champions elect Templepatrick. Even then, the two sides would be level on points and promotion would go to the side with the better net run rate.

The Firsts completed their job by bowling Superkings out for 117 and then reaching the target within 18 overs. Incredibly, BISC also played their part by upsetting the odds and winning by 5 runs against Cliftonville Academy. These two outcomes meant that Cliftonville’s net run rate fell to 2.025 and Ballymena’s climbed to 2.082 meaning that Ballymena are promoted by the slimmest of margins.
Massive congratulations go to skipper Stephen Colgan and everyone who played for the 1st XI this season. It is to their eternal credit that they continued to fight to the final weekend even when the odds were stacked against them. Their success is a just reward for all their hard work.

Ballymena Players earn representative honours
We are delighted to report that a number of Ballymena’s younger players have been selected for representative teams.
Congratulations to Josh Drain who has been selected for the NCU Under 14 squad which will travel to Taunton from 23rd to 28th July to take part in the West Cricket Festival at King’s College, Taunton.  Josh has been batting and bowling consistently well this season and his selection is well-deserved. Full details here.
No fewer than 3 players have been selected in the 13-man NCU Under 17 squad which leaves on tour to Ipswich and St Albans from Monday 26th to Thursday 29th June.  Jonny Browne, John Glass and James McClean will all travel to England where they will play against St Joseph’s School, Ipswich and in the prestigious St Alban’s Cricket Festival.  This represents another great opportunity to compete at a high level against some very strong sides.  Full details here.
Finally, further congratulations to James McClean who was selected to play for an Ulster Schools XI against MCC at Campbell College on 21st June.
Memorial for John Caldwell – Fundraising Appeal
It has been agreed by the BRFC Board of Governors that the Cricket Section would take the lead in erecting a memorial to commemorate the life of John Caldwell. The memorial will be in the form of a clock, to be erected on the outside of the clubhouse, and accompanied by a suitably inscribed plaque.  Further details, together with information on how to contribute, can be found here.
Ballymena players selected for representative winter training squads
Congratulations to Jonathan Browne, John Glass and James McClean for their continued selection for the NCU u17 development squad.  Their involvement in the squad will undoubtedly help their on-going development and of course help to contribute to the future success of the club.   Full details here.
Further congratulations go to James McClean for his inclusion in Cricket Ireland’s u17 Winter training squad. Involvement at this level is a tremendous opportunity and bodes well for the coming season. Full details click here
.