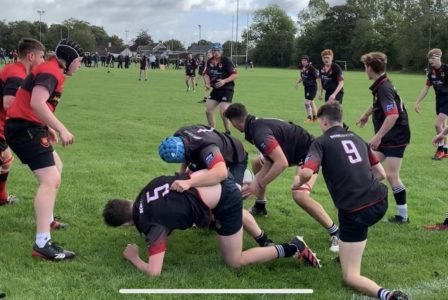 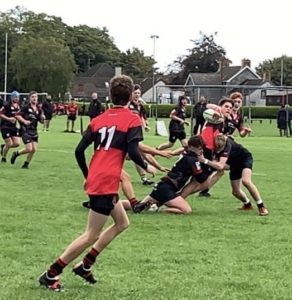 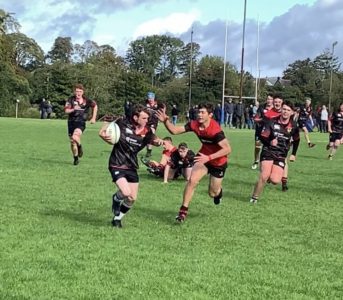 Ballymena U18s carried on their winning start to the 2022/3 season with a home win over Carrick on 1stOctober.

On a windy autumnal morning both teams produced a committed game of rugby played in good spirit.  It was Carrick who scored first on 3 minutes, the home side made hard work of the kick off, failing to clear their lines which led to turnover ball.  Ballymena erred at the breakdown and gave away a penalty which was duly despatched by Carrick’s fly half.

From the restart Ballymena gained territory and camped inside the Carrick half for several minutes.  The Ballymena pack went through a number of phases stretching the visitor’s defence who conceded a penalty within 5 metres of their own line.  A tap and go by the pack was repelled by Carrick with a metre to go to the try line; but a series of pick and goes from the ruck saw captain Craig Houston cross the line for a well-earned try, Robinson converted for the extras.

From the restart Ballymena cleared their lines and got some field position but a series of penalties conceded at the breakdown punished the Braidmen, eventually the posts were in range and Carrick’s kicker did not disappoint.  7-6 to the home side on 23 minutes.

The home side did not look too shaken and again started to get their forward pods working, pushing Carrick slowly backwards.  The home side looked after the ball particularly well through 9 phases and it was Houston who scored again as Carrick’s stout defence eventually gave way and the teams broke for half time at 14 points to 6.

The home side dominated territory and possession in the second half, but were constantly punished by the referees whistle in the breakdown.  And it was Carrick who put the first points on the scoreboard in the second half through another penalty kick.

Ballymena again rumbled into the Carrick 22 and second row Carson can feel himself unlucky as a close range drive was first awarded a try before the referee reversed his decision in favour of the visitors defensive efforts.

Carrick defended their line very well and Ballymena forwards earned their next try which was earned through another series of close range pick and go’s – hooker Stuart Holden touching down to make the score 21-9 with the conversion.

Ballymena were now dominant and were denied a fourth try when Zach Carmichael was held up over the line; but he made amends minutes later scoring after some scintillating phase play and tip passes opened up Carrick’s determined defence.

Hard carrying Timmy Carson was rewarded for his work rate when some slick passing put him into the right hand corner on 67 minutes.

To their credit Carrick showed great spirit and pushed Ballymena backwards into their own 22 from the restart, a chip through was fielded well by the Ballymena defence and Robinson launched a high kick in field to clear the lines. Conor Crabbe pursued the kick and Ballymena won the breakdown, supporting scrum half Ryan Thom given the ball to burst free from the chasing opponents to run in the final try from inside his own half.