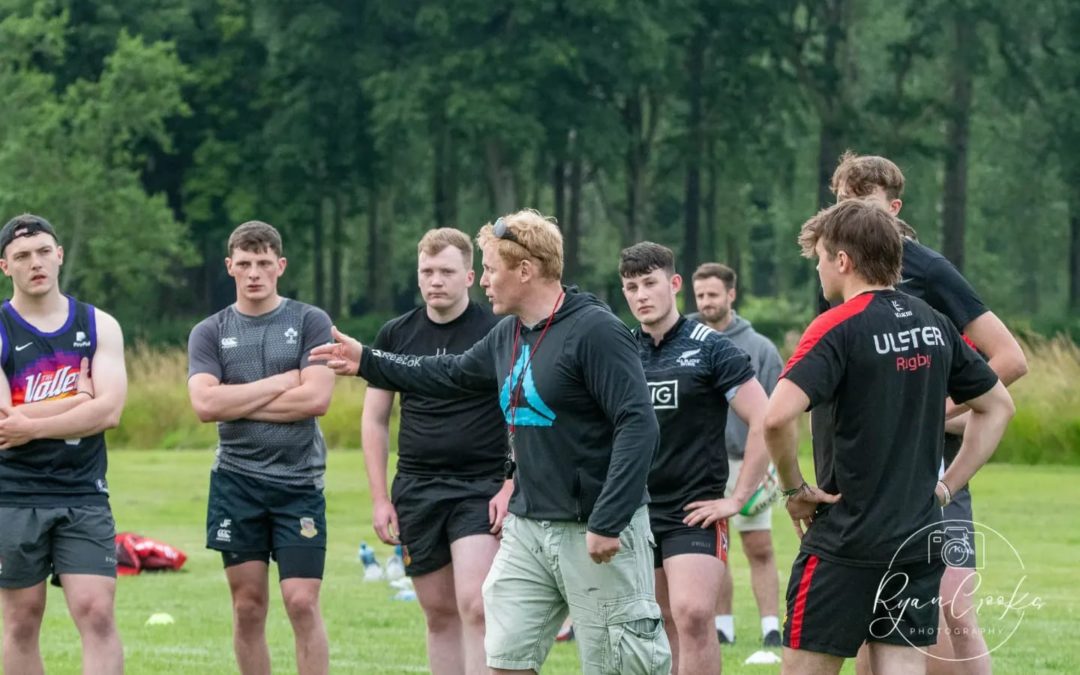 Ballymena go in to the 2022/23 season with a new coach at the helm and a sense of optimism after a successful previous season for the young squad.

Pre-season for the senior squad started on Tuesday 19th July and runs until the start of the Ulster League on 27th August.

Last season in the Ulster League, Ballymena were denied top spot in Division 2 due to a last day covid cry off. However, due to finishing ahead of relegated Rainey Old Boys in Division 2A and inside the top 6 Ulster clubs in AIL, the 1XV will now compete in Conference 1 of the Ulster League, against Balynahinch, Banbridge, Armagh, Queen’s and Malone.

Director of Rugby, Jamie Smith along with the senior coaching staff have had a busy off season, recruiting not only a new coach but strengthening the senior squad with a mixture of youth and experience.

The club welcome new head coach Andy Hughes to the club, ahead of the 2022/23 season. Andy is widely regarded in Ulster and brings with him over 10 years of AIL coaching experience. Formerly a player and then head coach at Dungannon RFC, with a stint at Armagh in between.

Jamie Smith commented, ‘’We are delighted to welcome Andy to the club. I think this is a step in the right direction and brings a fresh approach to our set up. We have worked hard in the past few seasons to build a certain culture at the club, and Andy fits the bill perfectly’’

Previous head coach John Nicholl, who will take up his new role in Ballymena Academy, will assist with the backs. Ulster player Andy Warwick, and former AIL winner Darrell O’Kane continue to assist the forwards. The 2XV will once again be headed by Gareth Fisher and welcome the return of Mike Stevenson. Stephen Shaw continues to coach the 3XV after a cup winning season.

The highest profile signing of the off season comes in the form of Callum Patterson, who has returned to the club, after a successful professional career with Cornish Pirates. In the 19/20 season he was voted the club’s ‘Player of the year’ and named in The Rugby Papers Championship ‘Dream XV’. Unfortunately for Callum, injuries limited his appearances over the following two seasons.

Commenting on his return, Callum stated, “I’ve had a very enjoyable professional career but after much jubilation I decided my time was right to leave professional rugby to the side. A tough few years with injury has been a testing time but I’m happy to start a new career journey and to come back to my home club Ballymena. I hope to give back as much as I can to all players at Ballymena RFC”.

Club stalwarts Andrew Ferguson and James Taggart return for their 19th season of senior rugby, in what is a remarkable testament to their professionalism on and off the pitch and their commitment to post match recovery. Both players featured heavily in last season’s AIL campaign and will add valuable experience in Andy Hughes’ first season at the helm.

The main focus of the 1XV season will centre around the Energia All Ireland League Division 2A. Last season, John Nicholl’s squad earned a place in the top 4 end of season promotion playoffs, losing to table toppers Queen’s University in the semi-final. Queens had to settle for a league points scoring record, after Buccaneers secured promotion on the final day.

Joining Queen’s in 2A will be Navan RFC, relegated last season from Division 1B and Blackrock College who secured promotion from Division 2B after finishing third in the regular standings. Ballymena play both teams in the opening weeks, getting their AIL campaign underway with a difficult away trip to Blackrock on 1st October with Navan being the first AIL visitors to Eaton Park the following Saturday 8th October. The Navan fixture will provide the season’s first, ever popular, pre-match corporate lunch and will provide entertainment to sponsors, opposition officials, members and their guests alike.

Elsewhere in the club, Gareth Fisher and the returning Mikey Stevenson will be looking to build on last season’s 2XV league victory and hope to better their showing in the cup competitions. Most of last season’s squad, with Alan Smyth a notable retiree, remain available to the coaching team and with the senior squad being bolstered by new signings, the 2XV season is one to be optimistic about.

Stephen Shaw’s 3XV won last season’s Forster cup with a dramatic extra-time win at Eaton Park and performed well in the league competitions. With the influx of young talent from the youth section and local schools alike, the 3XV will be optimistic about improving on last season’s efforts and securing more silverware.

Peter Crabbe will again combine Charman duties with running the club’s 4XV with the aim, as always, to have a successful cup run and ultimately a return to a Kingspan Stadium final. Last season saw playing returns for a few long term absentees and Crabbe will hope to persuade more to return for the league and cup run.

Rodney Hall has agreed to take over the 5XV reins for the coming season. The 5XV has served as a key development team in previous seasons and where some players will transition into adult rugby for the first time.

We wish all teams every success in the coming season and encourage everybody to come out and support on a regular basis.