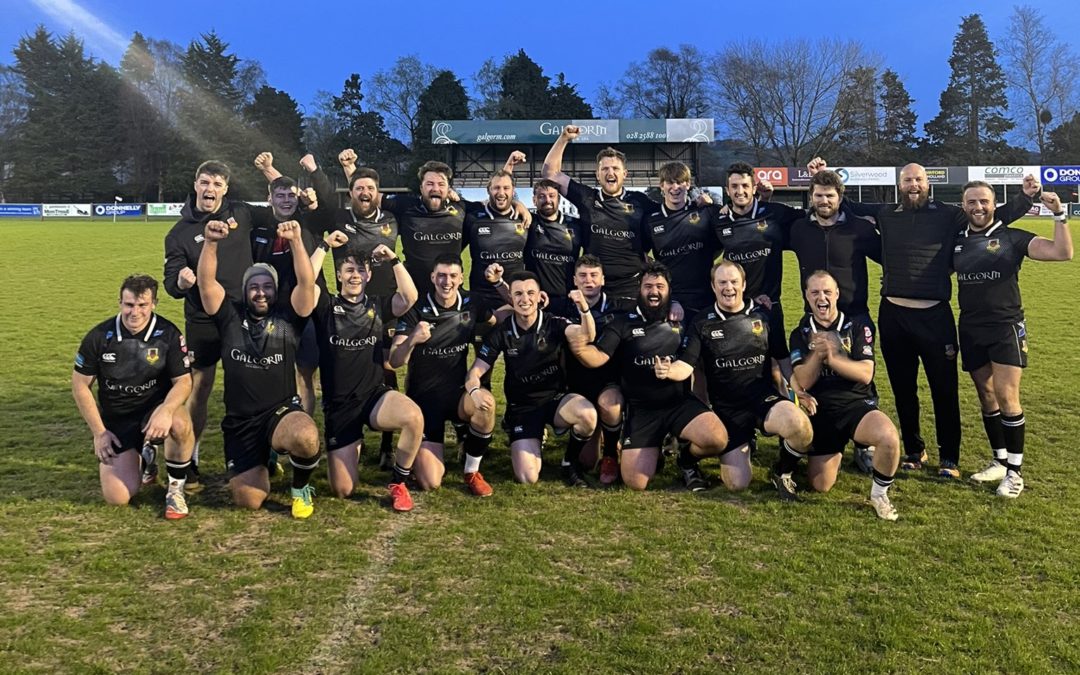 Ballymena 2nd XV welcomed Ballynahinch 2nd XV to Eaton Park, knowing that a victory would secure top spot of the 2nd XV league.
Ballymena kicked off with a strong wind at their back, knowing that they had to capitalise on this during the first half. Spurred on by a strong home support Gareth Fisher’s side produced a flawless first half performance against what was a very strong ‘Hinch side.
George Hargy opened the scoring, driving over from close range after a number of phases in the Hinch 22. Conversion missed and Ballymena led 5-0. The lead was extended soon after, again after keeping the ball through multiple phases, centre Alan Smyth drove through a number of Hinch defenders to score. Try converted from Sam Millar and Ballymena now led 12-0.
After two tries coming from the physicality of this Ballymena team, their 3rd try was an example of a great team try. Sam Millar’s inside pass put Alan Smyth through a gap in the Hinch defence and Smyth evaded the covering full back for his second try of the night, much to the delight of the home support. Conversion kicked by Millar for a 19-0 lead.
Ballymena knew that they had to keep up this level of performance and got their bonus point try shortly before half time. Peter Wallace carried into contact close to the line and seemed to be well tackled by the Hinch defence but managed to dot the ball on the line for the try. A fantastic finish to round off a fantastic half of rugby.
Despite the 26-0 lead at half time coach Gareth Fisher reinforced his message that excellent defence has been the foundations of the 2nd XV this season and this upcoming half of rugby would be no different, playing into a strong wind.
As expected Hinch immediately started on the front foot and spent 10 mins camped in the Ballymena 22. Brilliant defence from the whole Ballymena team kept them at bay and Ballymena were rewarded with a turn over from Darrell Montgomery who ran the ball out of the 22. Hinch gave away a number of penalties and this allowed Ballymena to work their way up the pitch. This passage of play resulted in second row Adam Mitchell scoring in the left corner and gave Ballymena a 31-0 lead.
To their credit, Hinch hit back almost immediately and scored two quick tries through their dangerous backline. This left the score 31-12 with 20 mins to go.
Ballymena then gained the upper hand in the match again. The backline shutting down Hinch attacks and the forward pack disrupted a number of lineouts and gained a number of scrum penalties. With 5 minutes to go, Sam Millar kicked a penalty to leave the score 34-12.

Shortly after the final whistle was blown and the 2nds were confirmed as league champions for first time in 14 years. This is nothing short of what this squad deserves for the efforts both the players and coaches have put in over the season. With many young players playing a major role in the 2nd XV squad the future is looking very bright for Ballymena RFC.