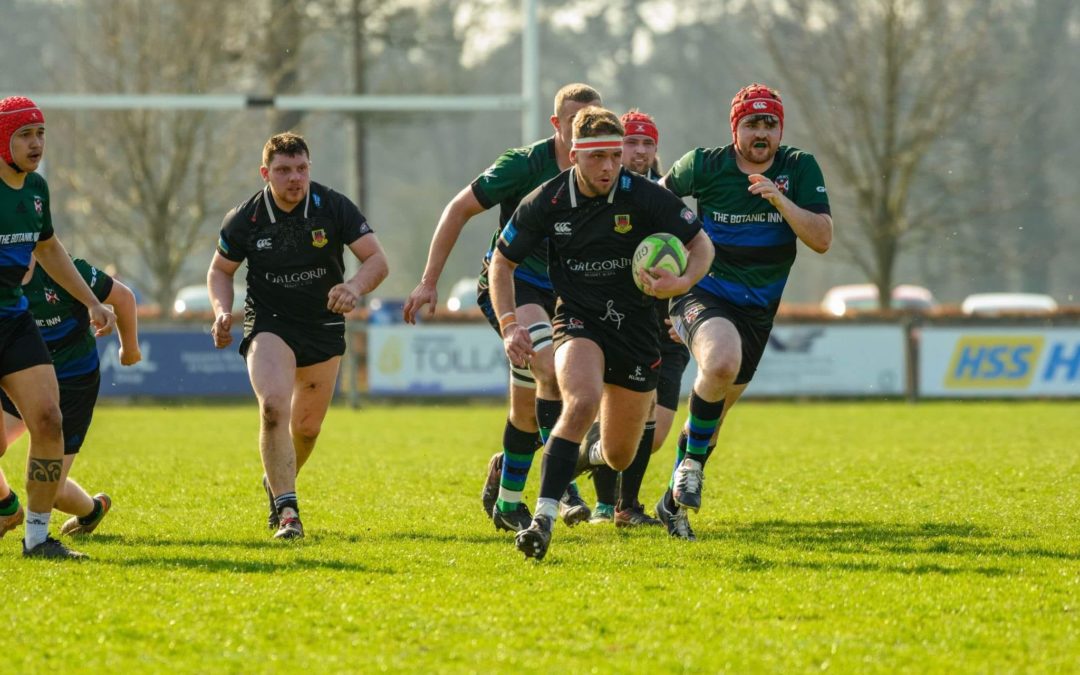 Ballymena 3’s defeated Queens 3 in dramatic fashion on Saturday at a sunny Eaton Park on Saturday in the Forster Cup Semi Final. Queens 3’s, 17 games unbeaten, came into this in red hot form and would have fancied their chances, having won their quarter final 50-0 vs Cooke 2’s the week before.
From the get go, both sides showed impressive phases of attack and stellar defence. Discipline was a big factor in the game with both sides amassing a handful of penalties early on in the game. A solid lineout drive for the Braidmen resulted in hooker Daire Mort going over for the first try on the 15 minute mark.  Conversion missed.
After a gruelling 10 minutes defending pick and go’s, Ballymena’s ill discipline resulted in a penalty close to their try line, which queens opted to kick for. However Queens missed a couple of very kickable penalties in quick succession, much to the hosts relief. Ballymena made sure to take their chances when Aidan Ritson stepped up to strike a long range penalty from the 10 meter line to extend Ballymena’s lead to 8-0 going into the break.
Queens lost 2 players to the sin bin early in the second half when ballymena were pressing hard out in the wide channels through fullback Connor Cosgrove and wing Peter Munce. Another well struck penalty from Ritson brought the scores to 11-0. However, Ballymena were unable to capatise further on this golden opportunity and instead had a player of their own sinbinned.
This proved to be a big momentum swing, when Queens, now back up to full complement, scored a fantastic try through counter attack play from their back 3, despite the protests from the host fans for crossing. Queens, with their tales up, produced another moment of brilliance when their 13 regathered a stellar chip and chase from an attacking scrum, to evade the desperate covering defence to dot down under the sticks. Conversion slotted, Queens took the lead for the first time, 12-11 with 10 minutes left on the clock.
Ballymena were determined to show their resilience and why they were such a force to be reckoned with, working their way up the pitch with some slick hands out wide and massive forward carries from forwards Dave Stevenson and Connor White. Another penalty was blown for Ballymena, who opted to go to the posts again. As Ritson stepped up to kick it, Queens lock ran to charge it down which resulted in the kick being retaken. Second time lucky, Ritson showed nerves of steel to slot the penalty giving Ballymena a 14-12 lead with 5 minutes left to go. Queens had one roll of the dice left, and were looking dangerous with sustained pressure in the Ballymena 22 in the final stages, but a turnover from number 8 Jack Wilson proved crucial, winning the biggest cheer of the day. Ballymena were able to relieve pressure and wind down the clock until the final whistle went to the joy of the loyal supporters packed around Eaton Park.

The Mighty Ballymena 3s now face Ballyclare 3rds XV on the Saturday 9th of April at Banbridge for the Forster Cup Final, K0- 5pm. All Support welcome to come down and support the boys on their great run.