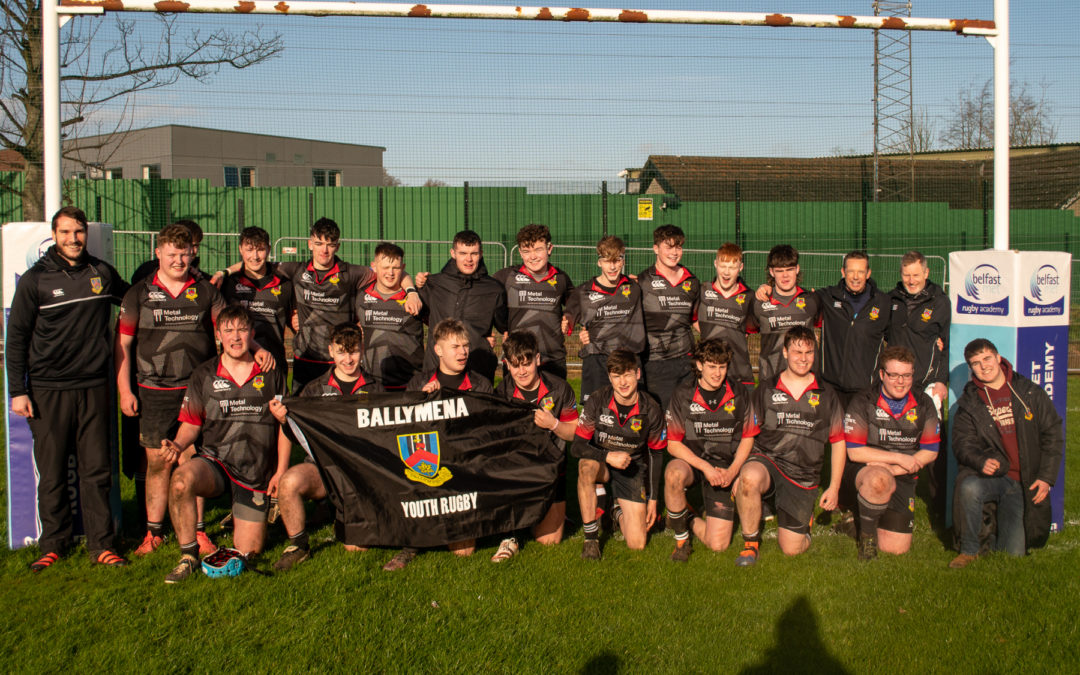 Ballymena under 18s are looking forward to a visit to the Kingspan Stadium for the final of the Ulster Cup on Saturday.  This is the showpiece occasion for club rugby at youth level and getting to the final is a huge achievement for the club.
The journey to the final has seen the Braidmen defeat Omagh, Rainey and Monaghan on their way and the team will hope to cap a successful season and make it a league and cup double when they meet Belfast Met College at the home of Ulster Rugby.
The under 18s have already made their mark  this season, going undefeated through their league campaign and winning a close play off final with a last gasp try against cup final opponents Belfast Met in Belfast last month. This will be the first time a Ballymena under 18s team have reached the cup final for since 2014 and the squad will hope to channel some of the positive thoughts that saw them lift the cup at the Kingspan 4 years ago when they were under 14s.
Captain Jack French is looking forward to a day out:
“We have worked really hard this year and are looking forward to playing in the final, the team have played some great rugby this year and we hope we can keep our momentum, play well and do ourselves justice on Saturday.”
Coach Nick Read said
“The team have been great to coach this year, they have been keen to learn and applied themselves very well.  We know that we are in for a tough game in the final, we have played Belfast Met three times this season, 2 of the games being won with a last minute Ballymena score.  We’re proud of our season this year and hope we can keep our winning streak going for another week.  The boys have great team spirit and this has got us through tough games this year, I’m sure they will do themselves justice whatever the score on Saturday.”
Don Pattison, Director of Youth Rugby at Ballymena is proud of the youth section’s achievement this year:
“All of our teams have performed very well this year, our under 14s got to the league play off final and were narrowly defeated in the cup semi final last week.  The under 18s have been outstanding so far, going unbeaten in the league is a fantastic achievement and they have worked hard for it.
Ballymena youth offers the opportunity to play and get great coaching for anyone who is interested to play rugby; we have boys in the youth section representing schools from all over the district coming together to represent Ballymeana RFC.  In the final on Saturday players from St Louis, Cross and Passion, St Killian’s, Northern Regional College, Greenmount and Dunclug will all be pulling on a shirt and playing for each other and Ballymena RFC.”
Kick off 2:15
Saturday 26/3/22
Share: