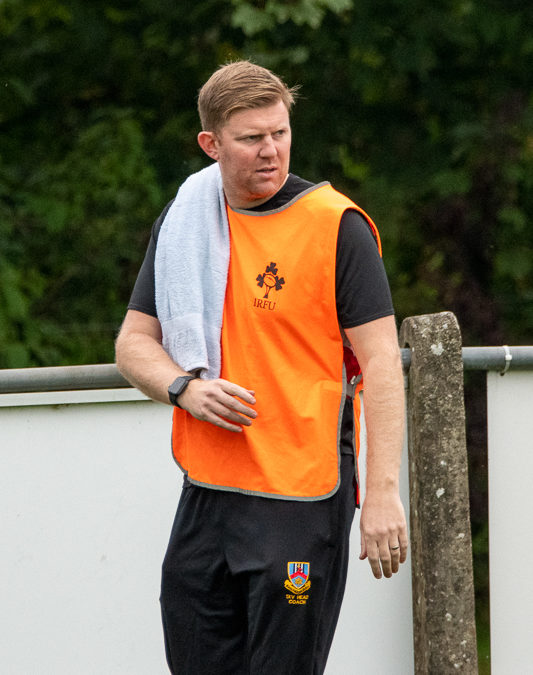 29/01/22
Nenagh 41 Ballymena 7
By Nicky Fullerton
Ballymena threw away some of their good work against Rainey and UL Bohemians after losing 41-7 away to Nenagh in AIL Division 2A on Saturday.
The men from Eaton Park saw off Rainey 12-10 and Bohemians 42-17 earlier in January, so Saturday’s 41-7 defeat to Nenagh was not what coach John Nicholl had expected.
Nicholl said: “We weren’t good today. Nenagh was far better and came out of the blocks very quickly and went 28-0 up and we were left chasing the game. We had some chances to get back into the game in the first half but we didn’t take those chances and we just weren’t good today, so there are lots to work on.
“It was disappointing as we conceded straight away. We missed our touch, they moved it across the pitch. Soft tackles let them through and we didn’t scramble well. It just wasn’t good.
“This month there have been some good things, but we have struggled on the road. We come on these away trips and start so slowly. It is not going to work for us, so we as coaches will have to look at it, get the mindset right and do much better away from home.
“We have two weeks off now in terms of games but we will have lots of hard work to do at training because if we think that this is going to cut it in this league we have no chance,” added Nicholl.
The home side – who are fighting fr their lives at the bottom of the table – will have been delighted with the start they made as they were 21-0 up before Ballymena had woken up.
Poor tackling led to Nenagh scoring tries through John Hayes and Davy Gleeson, before Pater Coman added a third.
All three tries were converted by Fionn McGibney.
Ballymena huffed and puffed but couldn’t put a dent in Nenagh, although Paddy Browne was stopped by the referee when clean through because Rhys Ervine was receiving treatment on the field of play. A strange decision from the official.
Then just before the break things got worse for Ballymena as Hayes went over again. McGibney converted and Ballymena was 28-0 down, while a number of players left the field through injury.
McGibney piled on the pressure at the start of the second half as he struck over a penalty to make it 31-0 and it was really was game over this stage.
The home side scored another try through Evan Murphy before Adam Lamont finally got a touchdown for Ballymena to leave the score 36-7.
To add insult to injury Nenagh scored another try near the end through Kevin O’Flaherty to leave the final score 41-7 to the home side.
The result means Ballymena drop behind Cashel to third in the league standings, so the clash between the two at Eaton Park on February 19 is a huge match for both sides.
Nenagh: Muldoon, O’Connor, O’Gorman, K O’Flaherty, J O’Flaherty, Buckley, Murphy, Hayes, Irwin, Corcoran, Coman, Coffey, McMahon, Gleeson, McGibney. Subs: Ryan, Hayes, O’Gorman, Ryan, Scully.
Ballymena: Mawhinney, Ferguson, Cundell, Browne, McKee, Howe, Lamont, Allison, Baillie, McKay, Corr, Crowe, Thompson, Ervine, McBurney. Subs: McWhirter, Taggart, Taggart, Hargy, Ritson, Millar.
Share: