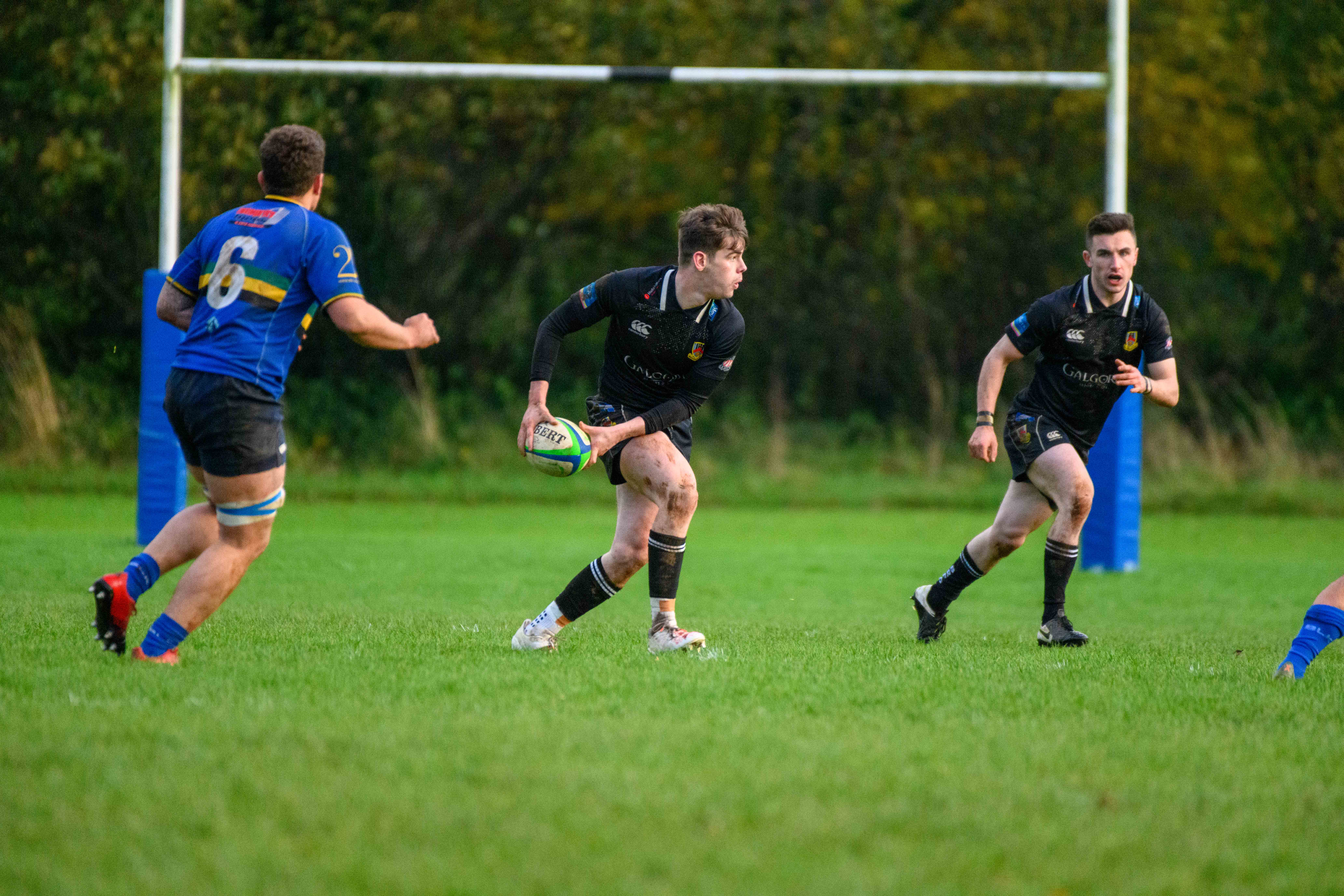 Ballymena 2XV were unlucky to come out the wrong side of an evenly fought encounter at Palace Grounds, Armagh. Conditions early on threatened to dominate the game with both teams bravely trying to play with width in torrential rain and a strong wind, favouring Ballymena in the first half.

Armagh dominated the early exchanges, however a strong visiting defence restricted any realistic Armagh scoring chances. Finlay Walker had a chance to open the scoring with a difficult penalty however his effort went narrowly wide.

Both team’s lineout struggled in the conditions with possession not guaranteed out of touch. While Ballymena dominated the penalty count and territory as a result, they struggled to capitalise in key areas of the pitch.

Captain Jack Lewis turned down an almost guaranteed 3 points to the right of the posts close to the Armagh line, instead opting for a scrum where the front row of Mark, Agnew and Logan were enjoying some dominance. The decision was vindicated when Darrell Montgomery powered through the Armagh defence from a well executed 1st phase move, with Finlay Walker converting for a 7-0 lead.

The home side responded with a try through former Ballymena player Ollie Millar. Millar took advantage of a lapse in concentration from a quick tap penalty and some porous defence to score a converted try from close range.

Ballymena had further chances to extend their lead however a deliberate knock on in a 2 on 1 situation prevented a decent scoring opportunity. Gareth Fisher’s side had to settle for another Finlay Walker penalty giving Ballymena a 10-7 lead at half time.

Out half Walker extended the lead to 13-7 early in the second half after more indiscipline from the home side. The experienced Willie Faloon came on as a second half sub for Armagh and brought a calming head to the youthful Armagh side and coincided with the penalty count turning in Armagh’s favour.

Paddy James was handed a yellow card when an attempted jackal was adjudicated as a high tackle and in this period, Armagh began to dominate both territory and possession. A scrum close to Ballymena’s line allowed Armagh number 8 to score off the base of a scrum. The conversion was missed leaving the score at 13-12.

The remainder of the game was played mostly between 22s with strong defence from both sides restricting genuine scoring opportunities. The best opportunity came with Armagh’s speedy right winger put in space, only for some excellent cover tackling from Montgomery and Eoin Ritson preventing the home side taking the lead.

The Armagh outhalf slotted a penalty to put them ahead for the first time at 15-13 in the third quarter, with the referee awarding a penalty for not rolling away at the ruck.

The 2XV battled hard to gain territory and went close with the forwards charging at the home defence. A difficult penalty attempt from the touchline gave the visitors a chance to win the game in the last couple of minutes however the attempt drifted wide and allowed Armagh to close the game out and progress to the next round.

This was a highly entertaining game to watch and either side would have been worthy of the victory. We wish Armagh every success in their Junior cup run and look forward to meeting them again later in the season.