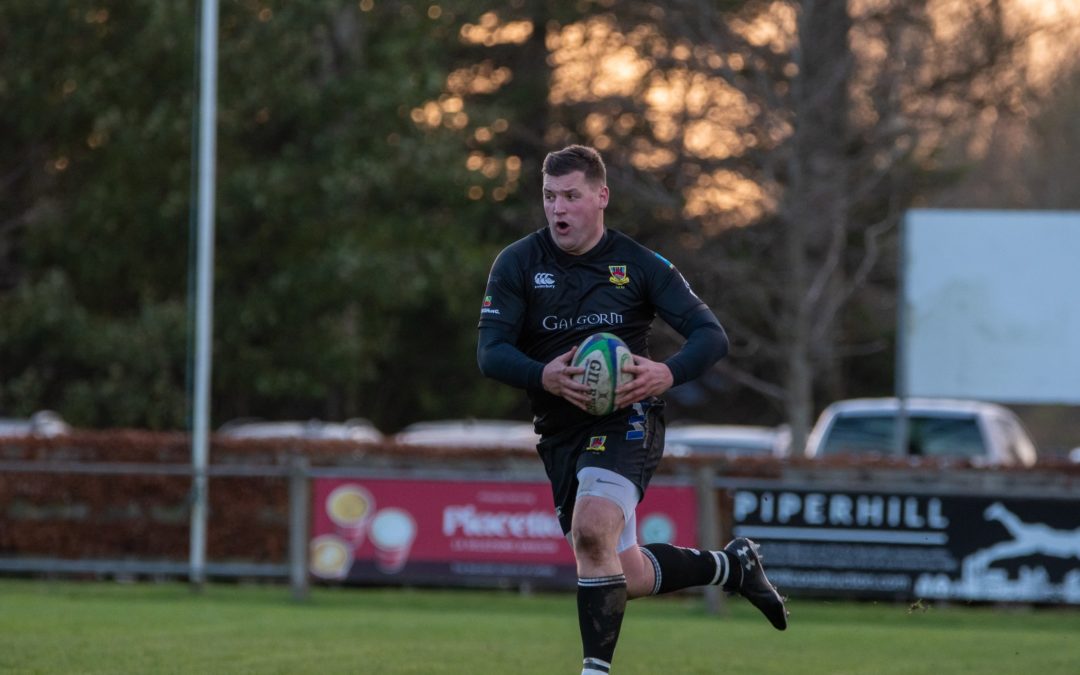 04/12/21
UL Bohemian 29 – 26 Ballymena
Report by Nicky Fullerton
It was so close but yet so far for Ballymena on Saturday as they lost 29-26 away to UL Bohemian in Division 2A of the Energia All Ireland League.
The result leaves John Nicholl’s side in third place in the league standings behind Queens University and Buccaneers, with Ballymena now eight points behind leaders Queens. As the league approaches the halfway stage Ballymena are still well in the mix.
They face Rainey at Eaton Park on Saturday in their next League fixture, so Nicholl will be looking for a home win to set his side up for the AIL Christmas break, before games against Rainey, Bohs and Nenagh in January
It will have been a day of mixed emotions for coach Nicholl as his men looked to be on their to an away day success when full-back Roger McBurney and James McNabney both scored early in the second half to give Ballymena a 26-19 lead with the strong wind in their favour.
The home side to their credit stuck to their task and with the Ballymena set-piece malfunctioning, they clawed their way back to win 29-26. It was a game Ballymena could and should have won, but this very young squad is still very much in development mode and there is more to come from them in the months ahead.
Coach Nicholl was disappointed with his side’s performance after the match.
“The set-piece did not function well enough and our game management was poor. The guys will learn from this and we will come back stronger against Rainey.
“I think this is three points lost as after the two scores after half-time we should have gone on and won the match. But our set-piece struggled and we tried to play too much rugby in our own half,” he added.
Ballymena conceded a try early on as Bohemians caught and drove a lineout to give themselves a 5-0 lead. Their number ten Harry Byrne missed the conversion in the windy conditions.
The visitors were then hit by a yellow card for winger Dean Millar – but what that was for is anyone’s guess?
With Millar in the sin-bin, Ballymena went further behind as Bohemians piled on the pressure to be awarded a penalty try to go 12-0 up. Bryne missed the conversion but Ballymena now had work to do.
Ballymena then got themselves back in the game as a rive resulted in Andrew Ferguson diving over. Tim Small added the conversion leaving the game 12-7 to Bohemians.
But just as Ballymena got themselves back in the game, Bohemians scored another try after pressure from their forwards on the Ballymena line. Byrne added the conservation to extend his sides lead to 19-7.
Bohemians were then reduced to 14 men as they received a yellow card for an infringement.
With the home side reduced to 14 men, Ballymena crossed their line through Ferguson again to make it 19-14 at the break and it was game on.
It was looking good for Nicholl’s men as McBurney and McNabney both crossed for scores just after the break.
Full-back McBurney showed pace and power to speed in for a try, while number eight McNabney – who impressed throughout with his strength and pace – shrugged off a couple of tacklers to extend Ballymena’s lead. Small converted one of the scores to make it 26-19 to Ballymena.
However Bohemians were not finished though and with the Ballymena pack under severe pressure, the home side got in for another converted score to make it 26-26 with time running out.
The end of the match was not Ballymena’s finest hour as their scrum was under increased pressure and their line-out was failing to function with a number of their own throws being turned over.
Then with the game reaching its conclusion Bohemians were awarded a penalty after a period of pressure and Byrne his the winning penalty to leave the final score 29-26 to the home side.
UL Bohemian: Darragh O’Gorman, Joe Murray, Paul Clancy, Ben Swindlehurst, Jamie McNamara, Harry Byrne, Alan Kiely, Pauric Nesbitt, Conor Botha, Phil Poillet, Pat Staff, Dave Kinone, Teddy Rowesome, Conor Nesbitt, Ian Condell. Subs: Kian Regan, James Burton, Jay Traynor, Oisin Fagan, Colin Ryan.
Ballymena: Roger McBurney, Rhys Ervine, Matthew Corr, Glenn Baillie, Dean Millar, Tim Small, Ian Vance, Joe Mawhinney, Stuart Donald, Chris Cundell, Jonny Browne, Paddy Browne, James Howe, Adam Lamont, James McNabney. Subs: Simon McWhirter, Andrew Ferguson, Patrick Hargy, Sam Millar, Mark Thompson
Share: