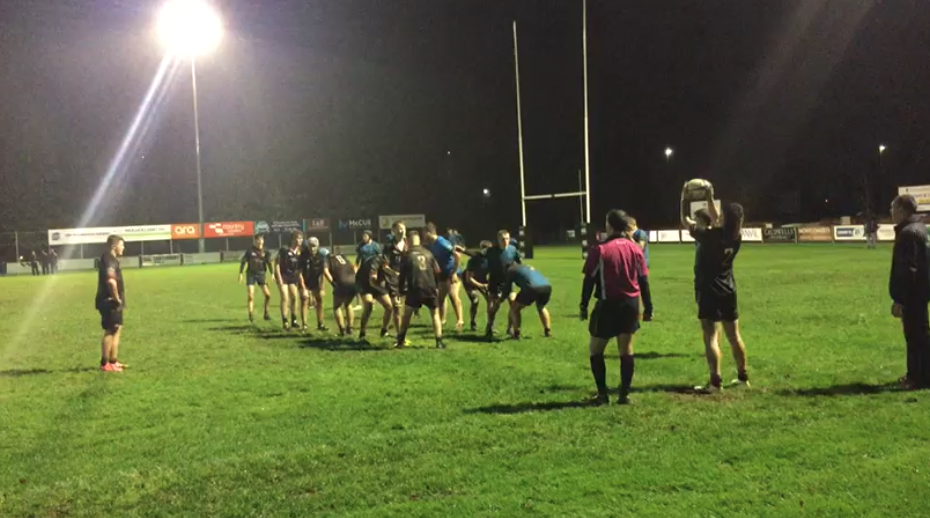 This fixture pitched the top 2 teams in the Ulster Carpets Provincial League against each other on a night at Eaton Park that may have been more suited to water polo than rugby.

But under floodlights and in front of a keen crowd sheltering in the stand the fixture kicked off and proved to be an excellent spectacle despite the weather.

Ballymena received the ball from the kick off and from the outset showed attack intent with the forwards marching their way up the pitch through hard carries from Jack French, Jack Addison, Craig Houston and Timmy Carson.  With the Met on the back foot the Braidmen pushed home their advantage with the ball kept tight and runners hitting gaps in the line until Ben Shaw crossed the line on 3 minutes to register the first try of the game.  An excellent start which signalled the home team had worked up a head of steam.

The Met pushed back from the kick off and gained territorial advantage playing in the Ballymena half and stretching the home defence in wide channels. An infringement in the breakdown gave the visitors a shot at the posts which narrowly missed.

The next 15 minutes was an arm wrestle with both teams testing each other out.  The Met continued to show intent in the wide channels and using their kicking game to put Ballymena on the back foot.  But slowly Ballymena played their way into the game and their confidence grew, O’Rawe at 10 started to find passes to hard charging back rows Carson, Surgeoner and Shaw who all made good breaks along with hooker McCartney. It was from one of these breaks from Carson that set up the next score with the ball recycled quickly and a pass from O’Rawe released the quick footed fullback Jack Gaston to break through and feed flying wing Richard McCann for try number 2 on 23 minutes.

The Met pressed again but the home side’s defence has been excellent this year and they held their line passionately with Addison, McCartney, Wylie and Houston all putting in big hits up front.  When the Met attempted to play through the midfield they were thwarted in the centre channels by Rhys Thomoson and Michael Read and by McCann and McSparren on the wings.

With few options playing through or round the home team the Met looked to play over the top, it was from one of these kicks that Jack Gaston fielded the ball and danced his way through the chasing pack, running almost the length of the pitch before he offloaded to Surgeoner who was in support and finished off an excellent try, converted by O’Rawe.  17-0 at half time.

In the second half Ballymena enjoyed territorial advantage and saw more of the ball, showing some slick handling despite the conditions.  The next score came from a scuffed clearance kick after good pressure from Read.  McSparren scooped the kick up and stepped 3 defenders weaving his way to crossing the line to make the score 22-0.

Fresh legs in the form of Heggarty and Gatt took to the pitch and made an immediate impact with big hits and carries.  Replacement scrum half Connor McQuillan started to pull strings around the breakdown getting quick ball out to awaiting runners who made inroads into the visitors time and again.

Ballymena will consider themselves unlucky not to be awarded a try when the pack crossed the line from close range with a series of strong carries pierced the Met defence, the referee adjudging the ball to be held up over the line.

Belfast Met still pressed and substitute winger Callum Mitchell had to field a number of kicks and make a series of interventions to prevent their progress down the right-hand side.

The next score was another huge effort from the pack with a series of pick and goes finally resulted in Timmy Carson continuing his run of tries in recent games.

Overall a determined and well thought out performance by the Braidmen who will take confidence from the way they played in terrible conditions against an excellent Belfast Met Rugby Academy team.