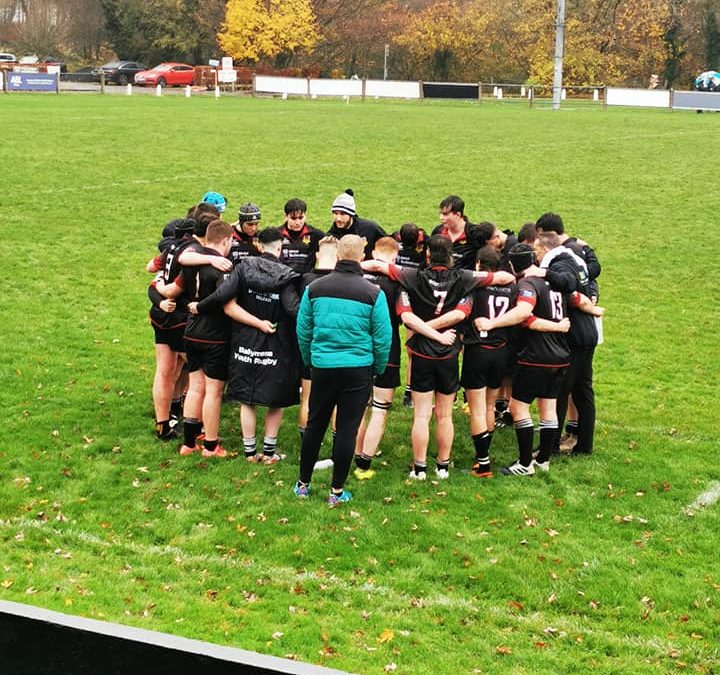 Ballymena 18s took advantage of a cancelled fixture against Banbridge to welcome Portadown to Eaton Park on Saturday.

Portadown top the East league and have 100% win record so far this year.  The game kicked off on a fresh day with a wind blowing across the pitch and it was the home team who started very strongly with the home side gaining territorial advantage in the early stages.  Portadown gave away a penalty and Ballymena reacted quickly to tap and give to the pack, strong carries broke the Portadown line and Timmy Carson crossed the line on 6 minutes to record his first score of the game.

It was Carson who struck again on 10 minutes with Ballymena moving the ball quickly in open play and forwards hitting good running lines which broke the gain line and stretched the away defence, Carson steamed through to score his second which was converted by Joe O’Rawe.

Portadown did not sit back and a series of penalties pinned Ballymena back in their own half, a quickly taken penalty a few metres from the Ballymena line caught Ballymena napping and Portadown scored on 14 minutes and converted.

The game flowed reasonably well despite infringements by both teams with Ballymena hitting lines around the breakdown and also giving the backs a run wide. Portadown also kept the ball alive kicking for field position and showing intent by keeping ball in hand through the backs.

The next try came from a well rehearsed set piece line out from Ballymena with Jack French and Ryan McCartney making good ground before Jack Addison crashed over the try line, again Joe O’Rawe converted to make the score 19-7.

The game was entertaining with both teams playing running rugby and it was from open play that the final score of the half came with Callum Mitchel making a good break from a restart, the ball was recycled and Jack Gaston’s dancing feet and pace saw him run clear to take the score to 26-7 at half time.

The second half followed a similar pattern to the first with Ballymena scoring first with Timmy Carson rounding off an excellent game with a hat-trick, O’Rawe added the extras.

Portadown kept their spirits up and scored next from broken play with some laxed tackling from the home side providing the opportunity.

However, Ballymena always looked dangerous and some string running by the pack and tip passes pierced the line time and again, on one such occasion David Surgeoner hot a clinical line and ran in from the 10 metre line to score a try.

Ballymena were now dominant and playing some excellent rugby, getting quick ball from the breakdown, Jack Addison got his second try after the home side had gone through a series of phases, stretching Portadown and Addison saw his chance to pick and go blind from a ruck to catch the away team off guard. Again O’Rawe converted to make the score 45-14

The Braidmen’s next score was a first drop goal of the season for O’Rawe coming from a goal line drop out, which was returned by O’Rawe over the crossbar for 3 points.

The game was ended with the pick of the tries with the team going through a series of phases started by hard running replacement full back Mark McSparren who set up field position, forwards hit up a couple of pods and created a potential overlap which was taken advantage of when the ball was moved quickly through several hands creating space for Callum Mitchell to score in the corner.

This was a pleasing attacking performance from the U18s who managed to get quick ball from the breakdown enabling them to play some quick rugby and put pressure on the visitors. In defence Ballymena had to organise themselves well in tight as well as in the wide channels as Portadown pressed time and again.