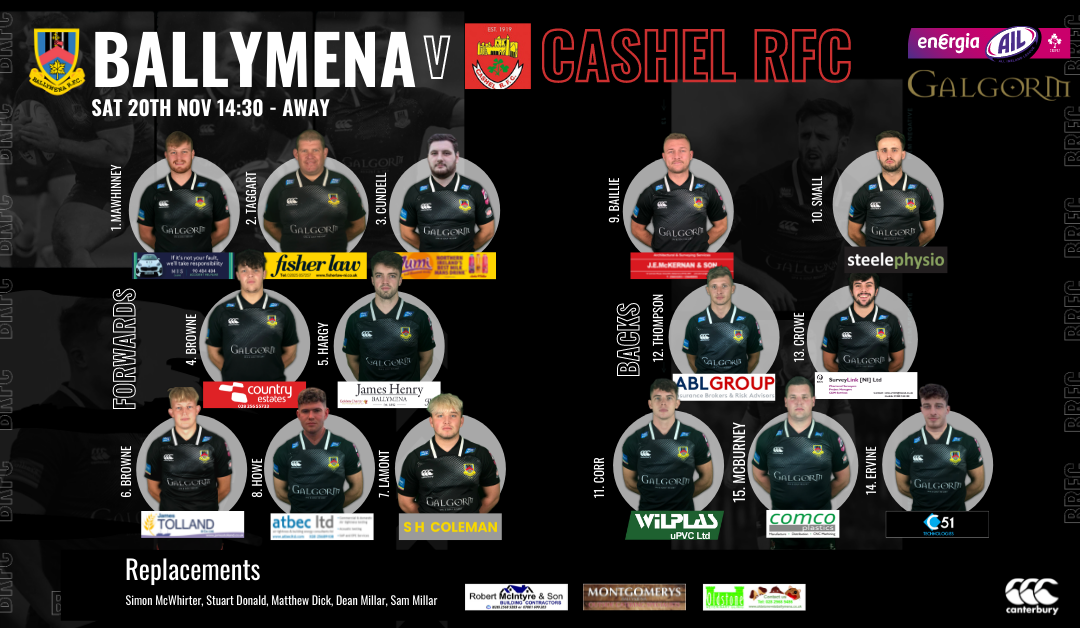 Ballymena 1st XV are back on the road this weekend as they travel to County Tipperary to face Cashel RFC. Head coach, John Nicholl believes this will be the teams toughest away trip this season.

“Cashel is a notoriously hard place to win at the best of times but after they defeated league leaders Queens on the road, I’d imagine they’ll be flying high”

The Braidmen come into the fixture in good form off the back of 4 successive bonus points victories with the last a convincing 44-25 home victory over MU Barnhall.

Nicholl believes to have a chance of victory Ballymena need to be competitive at the set-piece.

Nicholl has full confidence in his sides set-piece as it continues to improve week on week but the pack will be without key men James McCormick & James McNabney who’s good form has been rewarded with their inclusion in the Irish u20 camp. David Whann also misses out through injury and will be a big loss at the set-piece.

In the front row, Joseph Mawhinney and Chris Cundell continue in the front row with the experienced James Taggart coming in for McCormick.

Patrick Hargy comes into the 2nd row to replace David Whann and will pack down alongside Jonny Browne.

In the back row, the ever-impressive Paddy Browne and Adam Lamont are at 6 & 7 with James Howe coming in for McNabney at 8.

Nicholl acknowledged that his backline has been “performing well and scoring plenty of tries making competition for places even harder.”

The tough competition results in just one change to the backline that started v MU Barnhall.

Experienced duo Glen Baillie and Tim Small will continue to direct things at 9 & 10 with both players looking to build on their current good form.

Pierce Crowe was a late withdrawal from the MU Barnhall fixture but he will return in the centre alongside Mark Thompson.

The back 3 remains the same for the third week running with Matthew Corr, Rhys Ervine and Rodger McBurney all looking to add to their try tallies.

Nicholl paid tribute to the support the team has received to date this season.

“ The support both home and away this season has been noticed and appreciated. The rugby community seems to be behind these young fellas which I would encourage into November & December as we face Nenagh, UL Bohemians and Rainey.”