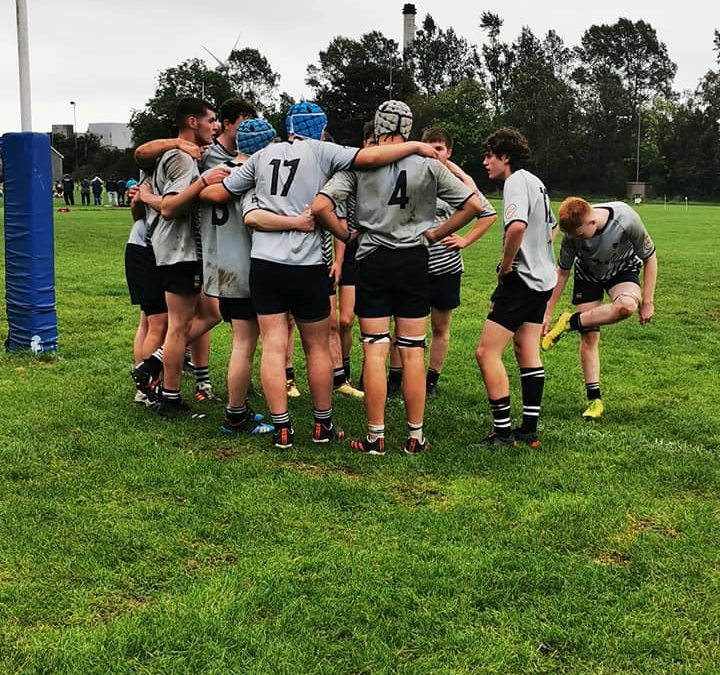 The under 18s travelled to Armagh on 30 October on an ideal Autumn day for rugby, and the team started strongly with an early line break for prop Callum Gatt who was unable to get a pass away to supporting number 8 David Surgeoner for a run into the line.  However Ballymena kept themselves planted in the Armagh half and forced a number of errors from the home side; eventually a penalty which was quickly taken earned the first points as prop Jack French crossed the line for try number 1, converted by O’Rawe.

Ballymena were far from the attacking threat of recent weeks, partially due to Armagh’s defensive organisation and line speed which put pressure on the away side’s handling. But Ballymena rarely looked troubled during the opening period and a well worked back’s move saw the Armagh defence opened up and centre Reece Thompson score in his third consecutive games after 20 minutes.

Ballymena were guilty of spilling ball and failing to convert the space and territorial advantage that they had created, but a third try was forthcoming when the forwards kept the ball tight and second row Craig Houston scored after 3 phases of play, O’Rawe added the conversion.

The visitors added to their tally 5 minutes into the second half as the full back Jack Gaston and the backs showed quick hands to get the ball wide to flying winger Richard McCann who accelerated away from the chasing defenders.

Armagh kept battling and did not let their standards drop, always putting pressure on Ballymena’s attack and dominating the breakdown, and they were rewarded for their efforts with a try as the away team’s defensive line got too narrow and Armagh exploited the space on the right wing to score a try which they duly converted.

Armagh then had a good spell of possession going through a number of phases in the forwards, however Ballymena have taken pride in their defensive line in recent weeks and repelled attack after attack eventually winning turnover ball.  And it was the visitors who struck next when Mark McSparren scored after good hands from O’Rawe and Read drew the defenders and put him through, and with one man to beat he dipped a shoulder and stepped inside well giving a clean run to the line.

The match finished with a try from a driving maul following a lineout, touched down by captain Jack French.

Overall U18s will be pleased to come away from a team like Armagh with a win, knowing that they were not at their best but even so able to keep their unbeaten run going.