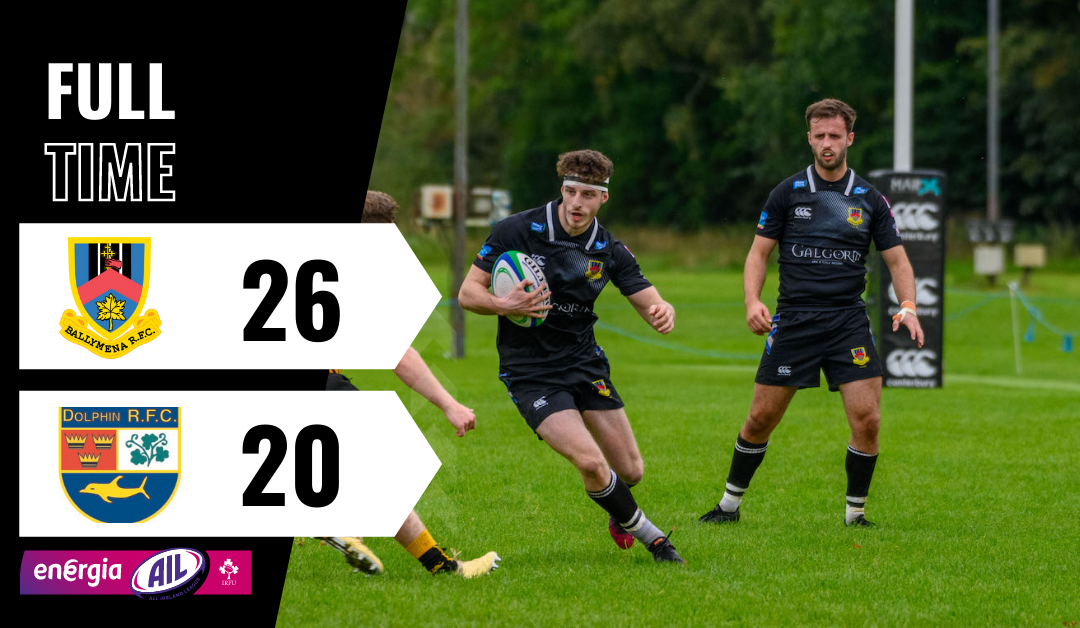 Ballymena triumphed over Dolphin in Musgrave Park in their first AIL win on the road since 2018, making it 3 bonus victories on the bounce in the 2021/22 Energia AIL Season.

Dolphin opened the scoring in the first few minutes with a penalty from their dangerous out half. However, with the wind at their backs, Ballymena dominated the first half against a physical Dolphin side.

Pierce Crowe opened Ballymena’s account after a break and offload from Tim Small to put the travelling side 7-3 up. Rodger McBurney extended the lead after a fine multi-phase move and some excellent handling, with James Howe’s final pass allowing McBurney to go in under the posts for another converted try.

Try scorer Beg then turned creator, an inside ball from Stuart Donald from a midfield ruck put him through the gap and a well-executed two on one put Matthew Corr in for his first try for the club, again converted by Tim Small to put Ballymena into a 21-3 lead.

Dolphin enjoyed a period of dominance and came back into the game with tries either side of halftime, aided by harsh yellow cards for James McNabney and Rodger McBurney, bringing them to within 6 points at 21-15.

With the wind at their backs, Dolphin’s strong set-piece saw them dominate territory and only for some determined defence from Ballymena’s young side, Dolphin failed to take the lead.

The home side’s dominance was rewarded with a try from close range and a kickable conversion was missed, giving Ballymena a 1 point lead heading into the last 20 minutes. Score 21-20 to Ballymena.

After a long period in their own territory, the visitors made their way up the pitch with a sustained period of possession that calmed the nerves of the coaches and travelling support. James McNabney made up for his yellow card with an excellent number 8 pick from 5 metres out, scoring in the corner to put Ballymena 6 points ahead at 26-20 going into the final minutes.

Ballymena defended their line like the bus trip depended on it and held out for a confidence-building 26-20 win, giving them a maximum of 5 points.

Adam Lamont picked up a well deserved Man of the Match award.

Adam Lamont was our Man of the Match from yesterdays bonus point victory over Dolphin RFC #energiaAIL pic.twitter.com/wHauB6T8WW

Ballymena 1st XV take on 2nd placed MU Barnhall at Eaton Park next Saturday (6th November), in the 5th round of the Energia AIL.