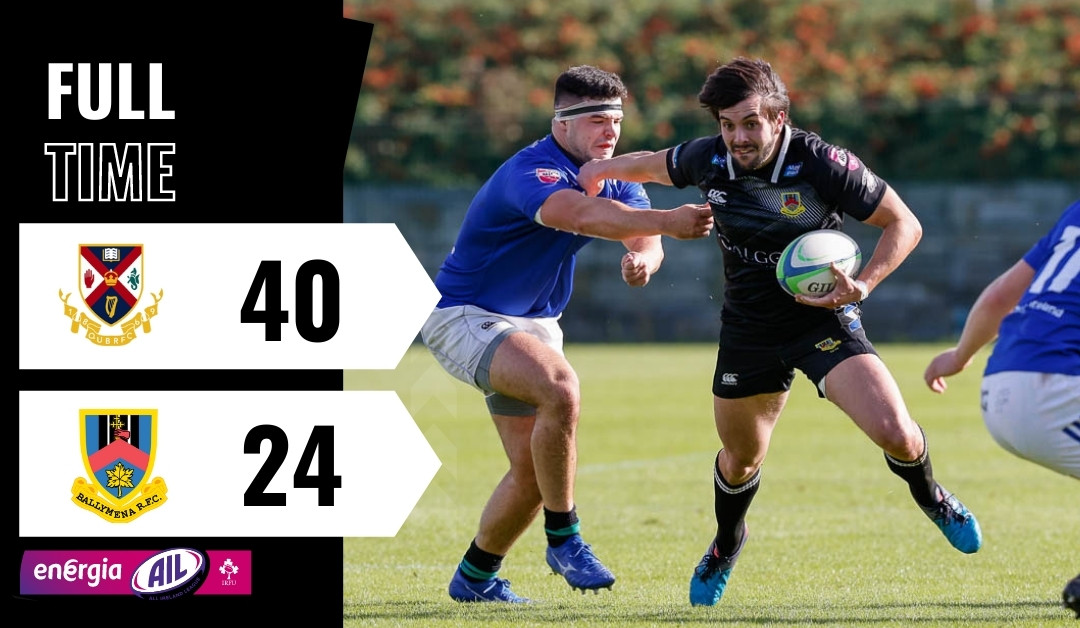 With a lush pitch, a gentle crosswind and unbroken sunshine, conditions were excellent for this opening AIL 2A match between The students and the Braidmen.

From the kick off Ballymena went on the attack and were rewarded just 2 mins into the game with a penalty centre park on Queens 22. Out half Tim Small, kicked the goal and Ballymena were up 3-0.

Queens replied 2 mins later with lock Gary Dillon breaking from the back of a scrum in his own half and streaking through a perforated Ballymena defensive line to open the scoring for the home team. James Humphreys couldn’t convert. 5-3 in favour of the students.

From a quick tap and go after Ballymena were caught offside, left wing Jonny Hunter nearly weaved to the try line but was felled metres short. Support was rapid and three phases later prop Anton Lupari powered over for try number two. This time Humphreys hit a post and the score was now 10-3 after 15 mins.

A high tackle by the visitors from the restart gifted Queens a further 3 points on the 17th minute as Humphreys found the target at his third attempt. The lead was now 10 points. Ballymena needed to stop giving away possession, penalties and points but they were struggling to cope with this rampant Queens side who were playing this match like a sevens game.

Ballymena finally got some ball and powerful running from outside centre Pierce Crowe set up a central position 5 metres out. Options abounded but Ballymena kept it tight and their reward was a try from hooker James McCormick squeezing home under the posts. Small converted and the gap was narrowed to 3 after 20 minutes.

No time to draw breath as Ballymena were back on the attack and won a penalty centre park on the student’s 10 m line. The shot from Small was just wide and unfortunately for Ballymena it was caught by Queens dangerous winger, Hunter who again made huge yards upfield. Dillon ran a great trail line and once in possession almost got his second try, just caught by the scrambling Ballymena defence. Then a knock on from the visitors as a they attempted to play out of their 22 gave QUB an attacking scrum. The ref saw an infringement and QUB’s flanker David Whitten took a quick tap and was over for another try, this time converted by Humphreys. 20-10 to Queens.

Queens’ work rate continued at its astonishing pace their fourth try came from replacement full back Harvey Patterson who sidestepped his way to line. The extras were missed, score now 25-10 on the 35 minute.

Ballymena’s afternoon continued to get worse as they are shown 2 yellow cards in as many minutes. It was inevitable with a 2 man advantage that Queens would score again and they did just before half time through their hooker Alexander Clarke, after a maul from a line out. Humphries converted to see the half time score at 32-10 in the home teams favour. To be honest it could have been more.

It’s hard to see how Ballymena could turn this contest around after such a dominant first half display from Queens. What reply could they produce? In this high tempo meet we didn’t have to wait long as they get their second try only two minutes into the second half, again from forward graft getting the try just beside the left upright. I couldn’t make out who touched down under the mass of bodies.

Small added the conversion and with the score line 32-17, it looked like Ballymena were up for a comeback but errors again gifted Queens possession. From yet another penalty Humphreys added 3 more. Now 35-17.

Finally Ballymena won their own hard earned penalty mid park and attempted a kick to touch against the wind which was missed. I could hear their coach’s despair with that error but what followed must have left him speechless. Queens fielded that kick and quickly shifted it from the left hand side across to Hunter who from inside his own 22, bust though a tackle, hit the gas and with superb supporting runs, from his other wing, Stuart Martin and flanker Whitten, Hunter gratefully received the ball back in his grip as he handed off a last desperate tackle to score in the corner. Try of the match. from man of the match Hunter. Humphreys didn’t add the conversion but Queens had snuffed out the Ballymena revival. 40-17 to QUB.

You wouldn’t need to be of a sensitive disposition in the Ballymena squad as the coach told his players his thoughts on that try. Hairdryer team talk over and Ballymena attempted to adopt the offload and quick recycle but made critical errors just as they look to score. They persisted and showed in the last 10 minutes that they were just as capable as playing the fast, skillful precise rugby that their opponents executed so well in the first half. Shame they waited until the game was bearing its conclusion.

One further push from Ballymena saw them rumble over for a converted consolation try after a maul from a line out but it was too little too late.

Big thanks again to The Front Row Union for covering the game. 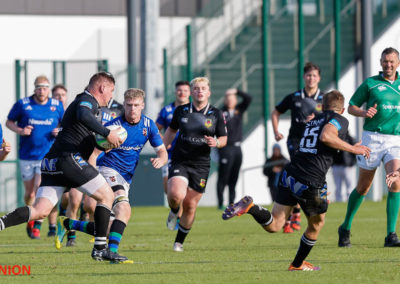 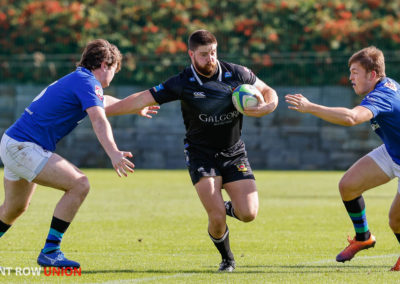 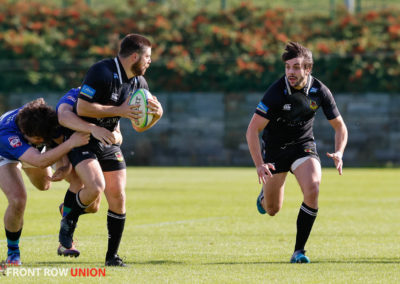 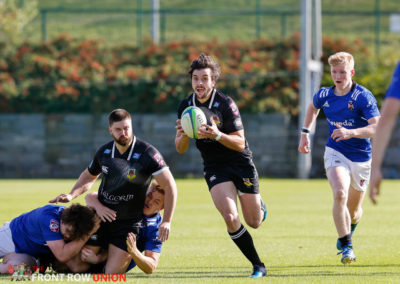 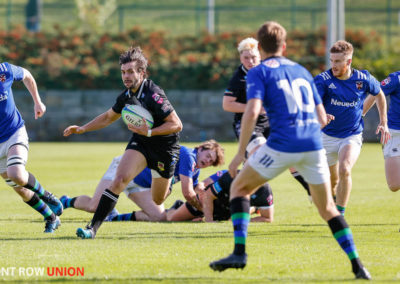 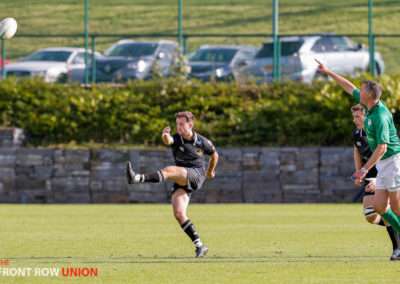 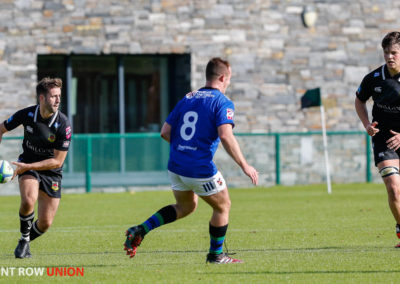 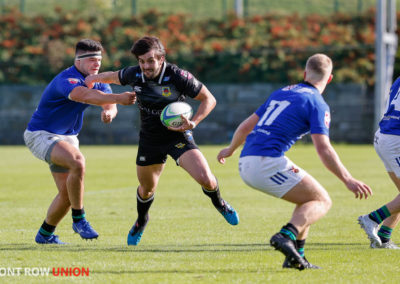 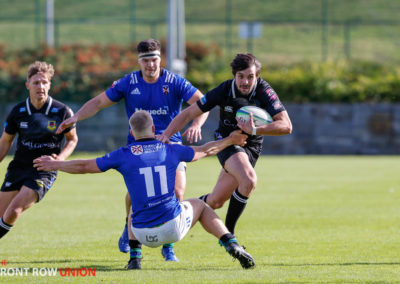 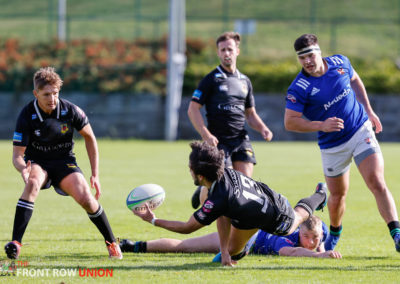 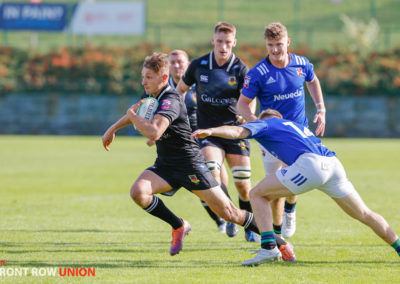 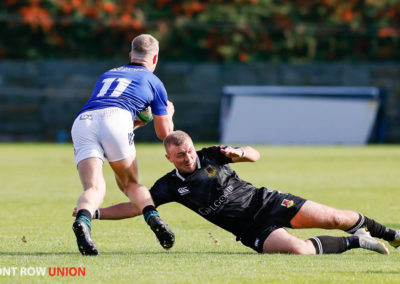 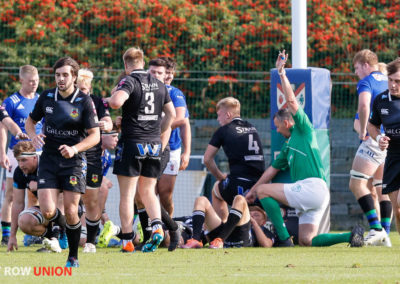 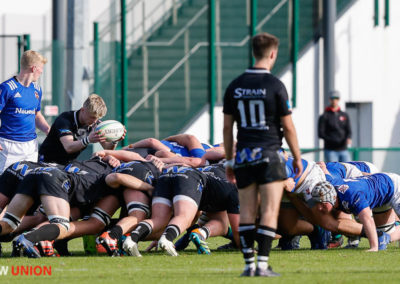 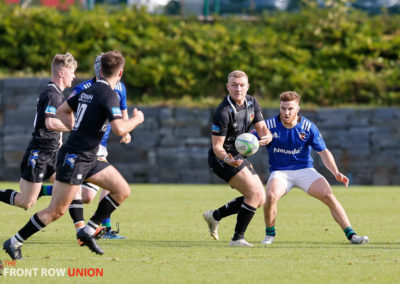 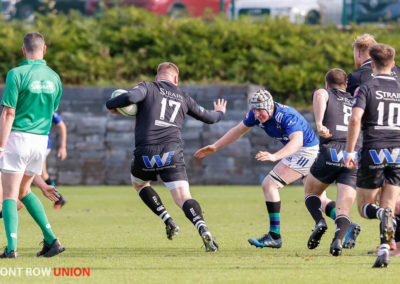 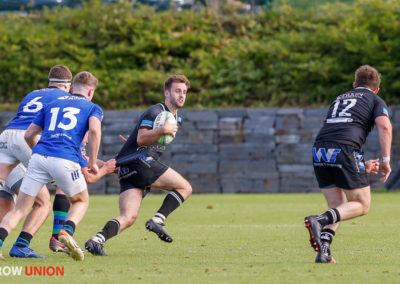 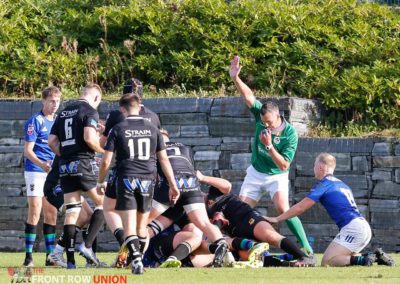 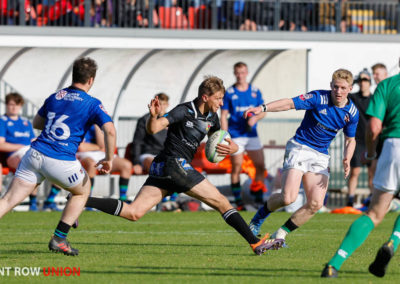