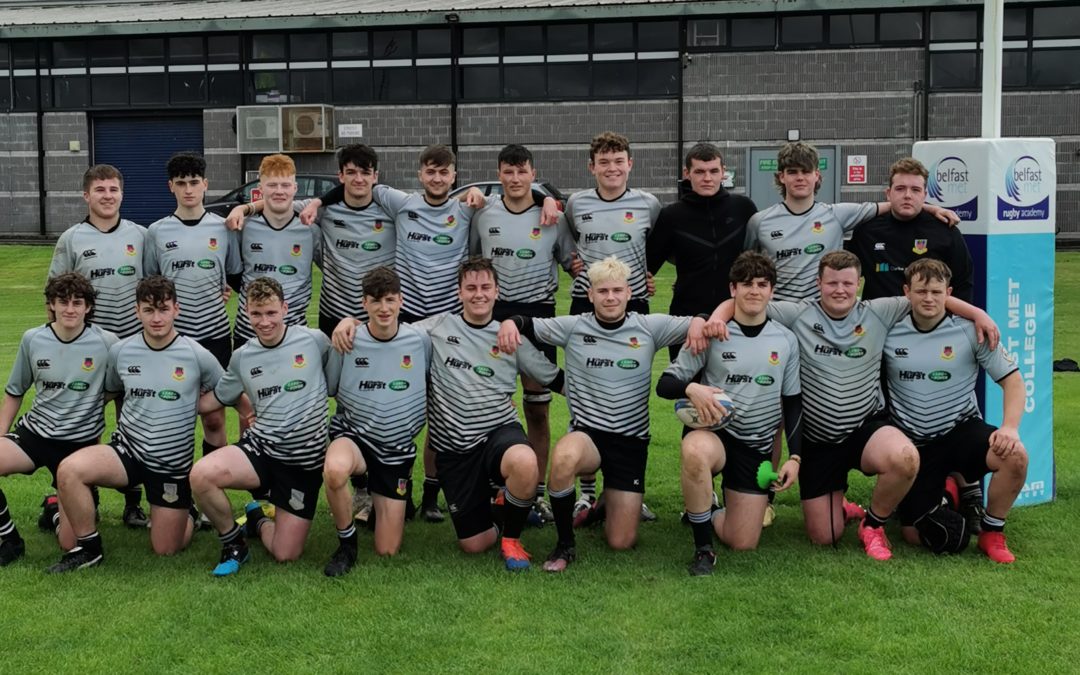 The second league game of the U18 Ulster Carpets Provincial League season saw Ballymena travel to Belfast Met to take on their Rugby Academy side.  Both sides were confident after winning their first league game and the game itself was a close affair, with one score separating the teams all the way through.

Belfast Met had early territorial advantage and the visitors had to defend stubbornly for the first quarter, there was little to choose between the sides with defences on top.  It was Ballymena who scored first, finding space in the wide channels with full back Jack Gaston accelerating through the Met defensive line before releasing flying wing Richard McCann for a 30 metre run in for the first try, which was converted by Joe O’Rawe. Belfast Met pressed back and saw a penalty kick narrowly drift wide and in a tight battle Ballymena crossed the line again after a driving maul but unfortunately the ball slipped from flanker Ryan McCartney’s hand and he lost control.

The score remained 7-0 to the visitors at half time and Belfast Met, playing with the slope and wind in the second half picked up their pace and scored early on when a Ballymena clearance failed to find touch and the following attack saw Ballymena fail to tackle the Met winger whose score was converted to make it 7-7.

The second half was another compelling affair with both teams pressing hard and there was little to separate the teams, O’Rawe kicked a penalty to put Ballymena ahead 10-7 but Belfast Met showed character to come back again to take advantage of some poor tackling to get their second try putting them ahead 14-10. The Met crossed the Ballymena line again by Read and Surgeoner managed to get themselves between the ball and turf, holding up the player and ball to prevent a try.

Both teams played some enterprising rugby, trying to exploit the space out wide.  On one such occasion the Ballymena backs, marshalled by O’Rawe sprinted clear with centres Read and Aidan McSparren committing their opponents before releasing winger McCann who was just caught by a scrambling Belfast Met defence. On another occasion debutant centre Rhys Thompson burst through the Met defensive line only to be stopped short be fierce Met defending.

Ballymena’s pack was weakened through injuries during the game and makeshift 8 which included backs Michael Read, Mark McSparren and Ryan Thom battled bravely against a larger opposition and gradually Ballymena started to win field position and a second penalty by Joe O’Rawe narrowed the Belfast Met lead to 1 point moving into the last 10 minutes of the game.

The team spirit of the visitors proved the edge in the last few minutes as once again the pack pushed Belfast Met and a penalty saw O’Rawe pin the home team into the corner.  A line out maul was halted by stout Met defending but pick and goes by Houston, McCartney and Heggarty threatened the Met line as Met defended manfully, eventually it was Jonny Wyle who crossed the line, tunnelling under the Met pack to claim a try with the last play of the game.